Despite a Friday evening spring snowstorm, East HS and the NCOS Falcons faced off for the Rugby Colorado Boys HS state championship Saturday.

The first 10 minutes were back-and-forth, with most of the play in the Falcon’s defensive half. East won a turnover penalty at a scrum 10 meters from the Falcon’s line and opted for another scrum. John Wilson made a hard run and was brought down inches from the line. From that ruck scrumhalf Nate Day sold a dummy and stretched over for the first try of the game. Cole Younaszi converted.

Both teams played strong defense following the kickoff with each earning penalties at the the breakdown. Eventually John Wilson stripped a Falcon’s ball carrier and ran 40 meters before a dropped pass allowed the Falcons to recover the ball. But the Falcons weren’t out of trouble yet. Their attempt to clear from five meters in front of their line was partially charged down by flanker Josh Delong and the ball fell perfectly for Wilson to catch and fall across the line for a try. Again Younaszi converted.

Down 14-0 the Falcons earned a penalty immediately after the restart and flyhalf Luke Neely’s kick made it 14-3. The Falcons controlled possession from the next restart and East’s ill discipline at the breakdown allowed the Falcons to get deep inside the 22. Strong tackling from East’s outside backs eventually forced a knock-on and East was able to clear from the scrum.

East worked from there and from another scrum Wilson ran right through the arms of three tacklers, spun away from two more, and then carried three others over the tryline for the try. Younaszi again converted to end the half 21-3.

The second half opened with more defense from both sides. Eventually the Falcons worked the ball into the East 22 and a strong run from Matthew Brox broke through for the Falcons’ first try. Neely converted to make it 21-10.

Both teams had opportunities over the next 10 minutes, but strong defense and dropped balls stopped either from scoring. East’s Wilson and Yavala both had runs that threatened, eventually earning a penalty 20 meters in front of the posts. Younaszi put it over to make it 24-10.

The teams continued to battle back-and-forth through the rest of the half. Neely kicked deep following an East penalty to set up a lineout for the Falcons 10 meters out. East was again penalized and hard charges saw Grey Yocum score for the Falcons. Neely’s conversion was good as the referee blew full time. East had won 24-17.

“This was a special victory,” said East Coach Bill Baer. “We’ve won eight championships, but this is our first time to repeat and win back-to-back. I’m proud of all of these players for their effort, focus, and ability to execute.”

“Our defense really stepped up today,” added East Coach Steve Gore. “Our forwards were able to contain the Falcon’s dangerous forward play, our backs had great line speed and tackles, and our deep three countered well. On attack, our captain John Wilson led from the front with a great platform provided by our forwards at the set piece.”

Hooker Tyler Boehm and wing OJ Thomas also had big games for East, while the Falcons were led by Neely and Yocum. 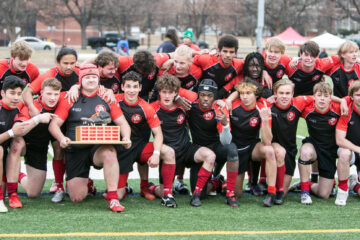 The 2023 Spring 15s season is almost here!  We are planning to have field practices Mondays, Wednesdays, Thursdays, and Saturdays at (or near) East High School. Tuesdays we’ll have film, fitness, or recovery sessions. We Read more… 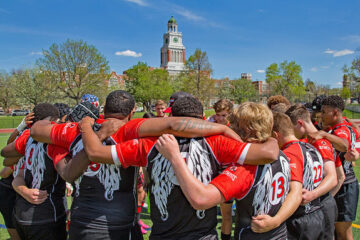 Free touch rugby is back! If you are a new player, this is a great way to get to meet the team. If you are a returning player, come out to sharpen your skills and Read more… 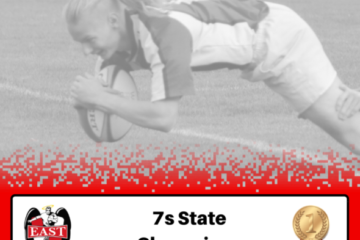